The Twelve-Factor App is a set of best practices for building web applications. Every project I build adheres to the principles laid out at the above website and I highly recommend internalizing them if you’re a full stack developer or in dev ops.

One of the key points is “dev/prod parity”: minimal difference between development, staging and production environments. For staging and production, the best practice is produce an artifact (typically an archive of everything needed to run your application, including dependencies) during your build step and deploy the same artifact to both environments. Deployment of a single artifact with its dependencies guarantees all platforms are running the exact same code, they only differ in configuration.

It’s common to see Amazon S3 used for artifact hosting, particularly if the app is also deployed on Amazon EC2. While S3 is cheap, it’s not free :). In my quest to build a completely free web application stack, I’ve built a way to use Google Drive as the artifact host. This blog post will break down how to upload your artifact to Google Drive from a Continuous Integration (CI) tool.

My CI tool of choice is Shippable. Shippable is similar to CircleCI or TravisCI (in fact it supports the .travis.yml format verbatim!), however it’s free for private repos for BitBucket and GitHub. I use it primarily with BitBucket for a one-two punch of free code hosting and CI.

This implicitly runs npm install loading dependencies from our package.json, runs our tests and builds the final artifact. Once that is all completes successfully, the after_script step is run. This is where the magic happens. In our project we’ve defined a shell script (./bin/upload.sh) that archives the app (and node_modules) and uploads to Google Drive. Here it is:

This script uses the prasmussen/gdrive binary ./bin/gdrive. Download the appropriate gdrive binary for your build system and put it in your bin folder in your project.

There are two keys we need to provide to make this work. How do we get them and how to we let our build process know about them?

Download the prasmussen/gdrive binary for your system and run the following command.

It will ask you to authenticate at a Google URL. Go to the URL, login with your Google Account, permit the app to view/edit your Google Drive files and copy/paste the verification code you’ve received back into the command line prompt.

Notice that when you run ./gdrive list a second time it no longer prompts you for authentication. This is because the client has cached your OAuth2 access tokens and refresh tokens in the file ~/.gdrive/token_v2.json:

Make note of your refresh token for later.

Go to Google Drive and navigate to the folder where you wish artifacts to be uploaded. Copy the ID from the URL bar.

Shippable has this nifty feature that lets you provide encrypted environment variables to your build environment. On Shippable navigate to Your Project -> Settings -> Encrypt.

Here we can encrypt the two environment variables we need, $GDRIVE_REFRESH_TOKEN and $GDRIVE_DIR: 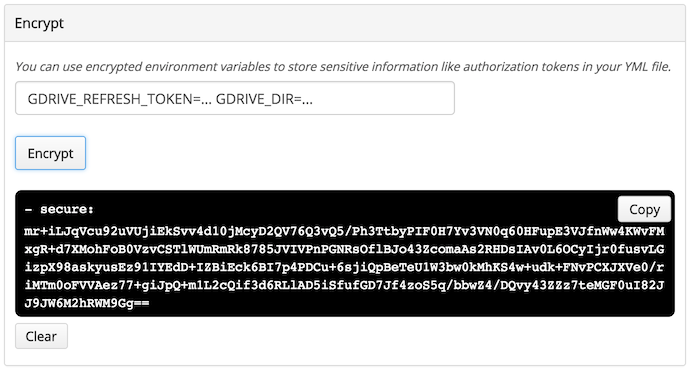 Copy the secure value to your shippable.yml. Shippable holds the secret key to the encrypted phrase so only they can decrypt it on build. That should be all you need to get your project artifact uploaded to Google Drive on every successful build!

Ansible uses a similar deployment script, ./bin/download.sh. This will connect to your Google Drive, read the contents of your $GDRIVE_DIR and find the most recent artifact that matches. It will then download this artifact to a /tmp folder locally.

Below is the ansible task that runs ./bin/download.sh, downloads the artifact locally, uploads it to your server, unarchives it and starts the service! Variables such as the gdrive_refresh_token are stored in Ansible’s encrypted vault.

This approach emphasizes a moving-forward mentality: code deployed is always the latest from the master branch. To “rollback” code, you can simply issue a git revert on an erroneous commit, push it up, wait for this commit to be build and uploaded, and then redeploy. In emergencies the logic in ./bin/download.sh can be modified locally to return older artifacts.

There you have it. I’ll leave the rest of the Ansible deployment script as an exercise to the user, but the core idea of uploading and downloading artifacts to Google Drive has been demonstrated.

Once this build flow is established, I’ve found it to be a remarkably stable way of doing deployment. Deploys are simple, fast and reproducible. There is no fetching dependencies on the server. When combined with Google Drive, Shippable, Bitbucket and Amazon EC2‘s free tier, this is a complete free web application stack that follows Twelve-Factor best practices.