On April 16th, 2016 Telegram unveiled their “$1,000,000 to Bot Developers. For free.” challenge. Developers were incentivized by a chance to win $25,000 USD to build novel, interesting bots on Telegram’s platform. Telegram is not the only major chat platform to embrace bots. Slack, Whatsapp, Facebook, Kik, Skype all have well developed bot APIs with bots ranging from image and video search, games to weather, sports and translation.

There’s no shortage of bot ideas out there and many developers are building them. This got me thinking. How hard would it be to build a bot anyway? What separates a bot from a command line REPL? This blog post details my journey to find out.

What is a bot?

Let’s start with a definition:

A computer program designed to simulate conversation with human users, especially over the Internet. - Google

Okay. A bot is supposed to simulate conversation, so what makes a conversation in bot-land? Conversations are:

Therefore we must give our bot all of these qualities. It must have a brain, or at the very least be able to make intelligent assertions about incoming data.

How to make an intelligent bot?

State machines! State machines allow you to give the bot context. Incoming messages can set the bot in a state that lets it know what to expect of the next message.

What are state machines?

Another definition, a state machine (otherwise known as a finite-state machine) consists of:

Above is an example of a simple finite-state machine. At any time it is in one state of a set of known finite states. From each state are defined transitions to other states.

For our bot, there are two types of operations. Here’s the lexicon we’ll be using:

The flowchart below shows the message parsing logic for commands and actions: 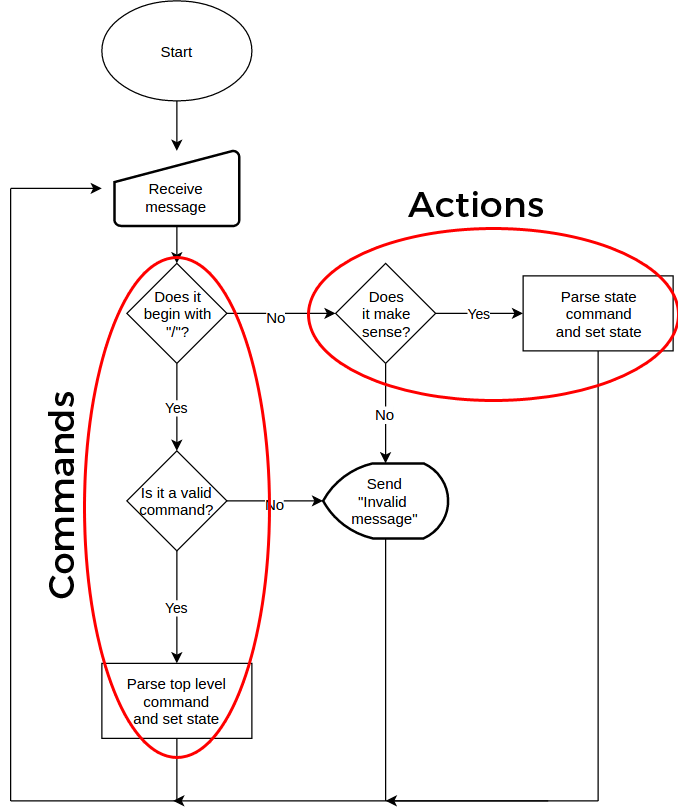 Now that we have the basics, let’s build a bot!

We’re going to be building Expense_Bot, a single-entry accounting bot. This bot will allow you create accounts and log transactions such as income and expenses to those accounts through a chat based interface. We’re going to be using Node.js and some database (pick your poison: MongoDB, RethinkDB, /(My|Postgre)?SQL(lite)?/) for this exercise.

Let’s define a set of commands for our chat bot:

For our example we’re going to go through the /newaccount workflow and build a conversation.

I’m going to define a set of data structures to hold our commands and actions.

All messages are triaged by an entry point. I’m using ES6 generators to leverage the yield keyword and create co-routines. These are asynchronous function calls that appear synchronous, with the value returned inline, eliminating the need for a callback. The bluebird promise library gives us Promise.coroutine(), a wrapper around generators that allows us to use yield to return the value of a promise. Errors that would normally be given to a .catch are raised, allowing us to use the traditional JavaScript error catching mechanism try { } catch (e) { }. Cool!

This parses the contents of the message. If it begins with a /, it creates a new State record in the database with a STATE of NONE. The idea is if the user is issuing a global command, its current context becomes invalid. The global command will then set them in a new state. If their message does not begin with a /, it must be a contextual response, so we retrieve their current state and direct them to the runAction function. This function looks like:

This references the actions data structure above. In each handler we can do validation on the incoming response. So for example when the user is in the NEW_ACCOUNT_INITIAL_BALANCE, the following handler will be used:

Consider the following conversation with an accounting bot:

In the above example: * /newaccount is a command. At any time it can be run and interrupt the flow of the conversation because it is global. * $750.00 is an action. It only makes sense if the current state is expecting it. If you asked me “What is the initial balance for your new account?” and I responded $750.00, that conversation would make total sense. However if I walked up to you and said “$750.00” out of nowhere, you would have no idea what I’m talking about. This is the definition of context.

When parsing the second message from the human, the bot knew to expect a dollar figure. Why? When the human asked to create a new account (/newaccount), it put the bot into state NEW_ACCOUNT_AMOUNT. In our bot we can define a specialized handler for the NEW_ACCOUNT_AMOUNT state that will validate the next response (is it a dollar amount?), save any persistent data ({balance: 750.00}). After they submit a valid dollar figure, we ask the user what type of account this is and transition them to the NEW_ACCOUNT_TYPE state. After the process is done we save the new account record and transition the human back to the NONE state.

This transition of states and building of data is illustrated in the table below.

After the final step, the data is committed to the database as a new Account model. There you have it. The finite-state machine model of computing fits well with a conversation chat bot. This approach works well with transactional or wizard style bots that walk users through a number of steps. Now go write your own bot!